Last October, I followed Spirit’s instructions and set out on a personal Odyssey to London, Paris, Chartres, and Barcelona. I had no idea what awaited me in these wonderful, diverse places, but I was excited to be called to the journey of discovery.

Come along and experience it through me.. . .

The weather in late October was perfect mid-summer weather– temperatures in all of the locations were in the 70’s– I loved it! Without having to deal with the crowds of tourists, I got to enjoy carefree summer-like days in some of my favorite places.

While in London I attended an international Tarot conference. It was stimulating, enjoyable, and informative. I saw several old friends from the States and made many new friends from England and Europe.

I also spent time with one of my dearest friends, David Nathan, whom I met many years ago in L.A. Since he moved back to London a few years ago, we have an agreement to meet at least once a year in a country that’s foreign to at least one of us, so this visit fulfilled that requirement. It also gave me a chance to discover how London had changed in the years since I’d lived there.

As much as it had changed, I was happy to find that it was still the London I knew. High tea at Harrod’s, sitting in Hyde Park with David while people and swan watching, and enjoying our life-times old interaction of play, deep conversations and the exchange of delicious gossip.

On one of our jaunts about town one sunny day, we went into a department store on Oxford Street. When we left the store an hour later, we found that the bright yellow sun and clear blue sky had turned a deep, dark orange! It was so eerie– people on the street and those of us exiting the store were stopped in our tracks by the overwhelming weirdness of it. What had happened to the sky in that hour!? What did this weirdness mean for us!? I had flashbacks of every Sci-fi film I’d ever watched.

Later, it was reported in the media that the strangeness was caused by smoke and cinders from the huge fires burning in Portugal. If that was the case, why was there no smell of smoke in the air? Why were there no falling cinders? Why was the atmospheric weirdness mostly in central London and not in many of the other neighborhoods? No one had an answer to those questions. As the media continued to explain, their story kept changing. And with each change, their story matched less and less what we’d experienced. Hmm…

I moved on to one of my favorite places in the world– Paris. The people, the museums, my lovely hotel in the 1st arrondissement– no other place is like it. And the warm weather! I was in heaven. In addition to my usual routines, I had two main goals– to explore vintage clothing shops and to visit Chartres Cathedral and walk its 900 year old labyrinth.

I’d done my research and armed with a list of the city’s best vintage shops, I set off to discover the treasures Paris held for me. At two shops, I struck gold! At the first shop, they’d just gotten in a shipment of new and nearly new shearling coats in great condition– all at the outrageous price of 40 euros each ($48.00 usd)! I bought a lovely, knee-length, hunter green one. Every time I wear it, I’m wrapped in the warmth of Paris. At the second shop, where they sold one-of-a-kind brand-new designer shoes, I was graced to find a 21st century, Louis the Sun King pair of beautifully unusual chaussure art so wonderful that I’m still amazed at my good fortune.

After that satisfying shopping trip, it was time for a different kind of spiritual experience, so I boarded a train for the medieval town of Chartres, about an hour outside of Paris. Chartres has one of the most beautiful old cathedrals in the world. It’s nearly a thousand years old and has an ancient labyrinth– a sacred pathway of Divine communion– inlaid in its stone floor.

Upon entering the Cathedral, I immediately felt the energy of centuries of faith, devotion, and prayer. I made my way to the labyrinth and said a silent prayer thanking God for sending me there. I asked to be open to receive whatever guidance and messages I had come for, and along with the other pilgrims, began my journey through the labyrinth.

There is almost no way to describe the sensation of stepping on to a path that countless numbers of seekers have trod upon for nearly one thousand years. As I did so, I felt a strong wave of beautiful energy wash over me and music started to play. And not just any church music. Here, in a cathedral in a small French town fifty miles outside of Paris, the tune that played was played on bagpipes! (This was the only music that played during the entire time I was in the cathedral.) I was then given a message that confirmed my soul connection to Scotland. I thanked all that is sacred as tears of joy and gratitude rolled down my cheeks.

In almost every section of the labyrinth, so much happened, so many messages of love were given to me, that by the time I got to the center of the labyrinth and I was told to remove my shoes and walk the rest of it barefoot, I knew I was truly undergoing a profound soul awakening. If walking the labyrinth shod was intense, walking it barefoot was a whole other level of traveling. With my shoes on, I could feel that God was in my heart; barefoot, I could feel that I was in God’s heart.

As I reflected on my experience on the train ride back to Paris, I again thanked God for my life and my path. I remember saying to myself, “Wow– Chartres Cathedral– it can’t get any deeper than that!” Little did I know. 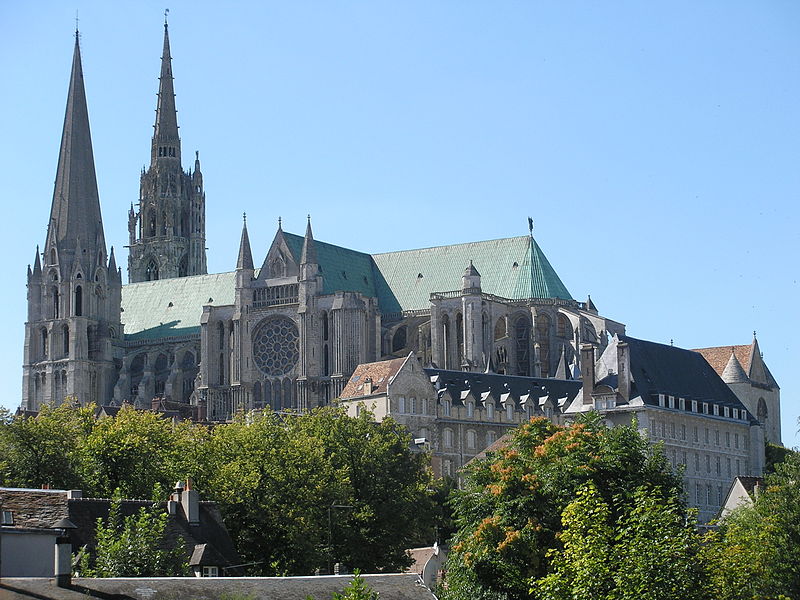 Beautiful Barcelona– a city of creativity and passion. It’s also the new home of another dear friend, Daniel, who recently married his true love and together they’re living a dream life. The few days I spent with them were marvelous, memorable and magical. As Daniel and Sergi played the perfect hosts, I experienced the beauty, soul, and complexity of Catalunya through their eyes and my soul knew it was, indeed, with kindred spirits.

On my next to last day there, Sergi took us to an other-worldly place about an hour outside of Barcelona called Montserrat. Montserrat is a monastery and shrine to La Moreneta that’s over a thousand years old and whatever words I’d use to try to describe it would be inadequate. But words are all I’ve got, so they will have to do.

Set in a mountainous terrain that looks nothing like the surrounding area, Montserrat feels so wonderfully removed from all you know, it feels like heaven on earth. Though it’s in Catalunya, it looks and feels like it’s in Italy. The buildings range in appearance from stone medieval structures to modern style architecture with a range of various colors, yet somehow they all seamlessly flow together as if one mind planned and built them. There are plazas vibrating with energy so beautiful that you know the stories about them being visited by celestial and off-world entities are true.

And there is the cathedral…

I’ve been in many beautiful cathedrals and other holy places in my life. I can say with absolute certainty that I’ve never been in a cathedral as beautiful as the one on Montserrat. As soon as you walk in, your soul knows it has at last found its way home. The photographs don’t do it justice. I don’t think it’s possible for anyone to capture the essence of it. Its beauty must be experienced to be understood. There is a special pew that when you sit in it, your reason for being throughout your soul’s journey becomes clear. 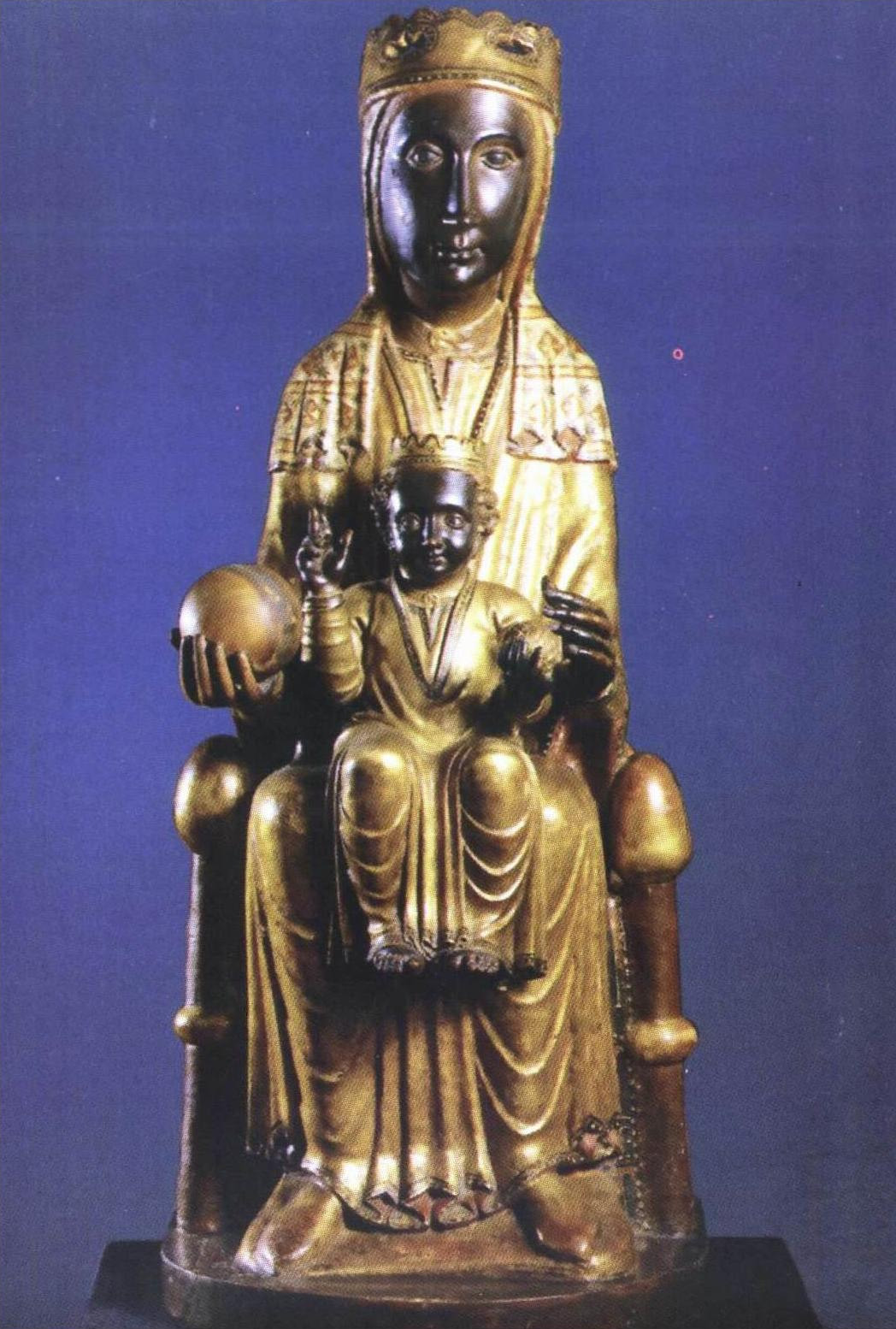 Sergi took us to meet La Moreneta, the Black Madonna, whose statue resides above the alter. As he led us up the stairs to her, he told us how to greet her, “Kiss the globe in her hand and you’ll receive a blessing.” Well, as much as I love blessings, I wasn’t about to kiss anything that millions of people over a thousand years had been kissing. I decided I’d kiss my fingertips and put them on the globe, instead. Hopefully, that would suffice and I’d still receive a blessing.

I kissed my fingertips, touched the globe with them and immediately my fingers were held fast to the globe! I looked into the Black Madonna’s eyes and was transfixed by her gaze. She began to speak to me and I replied. Our non-verbal communication went on for some time and was so obvious that I heard the people waiting in line whisper to each other, “Look, they’re talking to each other!” What she had to say to me matched the messages I received at Chartres and went even deeper in detail. I saw the continuity of life in its infinite energetic state. It was truly profound beyond any spiritual experience I’ve ever had.

Afterwards, Daniel and I discussed the messages we’d received from the Black Madonna. We’d each gotten the same message about the Catalan spiritual pilgrimage we’re to lead to the sacred sites of Catalunya, including Spain’s portion of the legendary El Camino de Saintiago pilgrimage route which ends on Montserrat.

Later that day, I remembered a conversation I’d had with David. He asked me how I was doing. I replied, “I’m happy and my mundane life is going well.” It wasn’t until I’d spoken those words, that I consciously realized that what is a “bucket list” life for others, is my “mundane” life. I am blessed, indeed.