“What the heart has once owned, it shall never lose.”
– Henry Ward Beecher

If you are in receipt of my previous newsletters,, you know that I’m back from leading my Scottish Highlands & Islands Odyssey and my fellow ‘Odyssey-ites’ (sixteen) and I had the most wonderfilled, magical, transformative time, ever!

Whenever I talk about the experience, people respond with a deep sigh and say, “I wish I could have been there.”

Therefore, I decided to share my day-to-day Odyssey experiences with you through a series of newsletters. Every few days, I’ll post an account with photos of our amazing adventure. Please click on the link below to visit my website if you would like to view any content that you may have missed, and please feel free to email me any questions or comments.

After the excitement of our visit to Croft Moraig stone circle, we all settled in for the drive to our next destination. Nicky proved to be the great storyteller she was known as as she told us the most entertaining and heartfelt stories about the history of the regions we passed through and the characters of old whose energy and spirit still inhabited the land.

As they communicated without speaking, finished each other’s sentences and seamlessly traded off the duties of describing the areas we drove through, I had to keep reminding myself that Nicky and Les had never worked together as guides before our Odyssey. Along with the beauty of the countryside, their collaboration was wondrous to behold.

After a while, I felt a type of contentment; it was like a gentle tug on my heart. My eyes were drawn to the horizon ahead of us and the closer we got to the mountain range in the distance, the feeling got stronger. Nicky pointed to the mountain range and told us that the mountains ahead marked where the Highlands began. Ahh! So that was it. The pull on my heart was coming from my heart recognizing that it was at long last going home. Later that evening, several other Odyssey-ites shared that they’d had a similar experience.

Les put a CD in the player and told us that the song we’d be hearing was by one of Scotland’s most revered singers, Dougie MacLean. The name of the song, ‘Caledonia,’ was the name the Romans gave Scotland when they unsuccessfully tried to conquer it many centuries before. As the song played, Dougie MacLean’s voice and lyrics perfectly expressed the feelings we were all experiencing as we crossed from the Lowlands into the Highlands: “Let me tell you that I love you and I think about you all the time. Caledonia you’re calling me and now I’m going home. If I should become a stranger, you know that it would make me more than sad, Caledonia’s been everything I’ve ever had.” Very few songs have ever ‘known’ me well enough to speak to and from my soul; ‘Caledonia’ is one of those beautiful few.

The energy of the Highlands is different than anywhere I’ve ever been. Each time I’ve visited, I’ve felt a deep emotional connection and I was pleased to know that this time was no exception. As we continued northward, one of my favorite sites came into view-the breathtakingly beautiful Eilean Donan castle. Built at the confluence of three rivers, it stands as a majestic symbol of the power and beauty of the Highlands.

Because of the extra time we’d spent at Croft Moraig, we were very late getting to the castle. We were told that the gift shop would be closing in a few minutes and that we’d be the last group of the day to tour the castle. So-we headed for the gift shop and did what we could there with the limited time we had. I’m happy to say that we made a sizable dent in their inventory.

Above the castle entrance is an inscription that reads, “As long as there is a MacRae inside, there will never be a Fraser outside.” We were led into the castle where we were given a short hi

story of the regal dwelling before being directed to the huge, fully restored dining hall, complete with clan crests, family portraits, and authentic furnishings and weapons. The castle guide demonstrated the might of the legendary claidheamh-mòr (claymore), the “great sword” that is the Scottish version of the medieval two-handed long sword. He even let Julie H. have a photo taken with it.

We were told that there was one ghost in the castle (there are at least three!) and we were challenged to find it. Wandering around this beautiful, homey, inviting castle was such a treat. Unlike other castles I’ve toured, Eilean Donan feels like a home, a dwelling place for the body and the spirit. It’s my favorite of all the castles I’ve visited. Their authentic ‘downstairs’-kitchen, laundry and servant’s quarters-was eerily life-like and fully staffed by manikins so real you expected them to speak.

Finally, it was time to bid the castle farewell and continue on to our final destination for the day, the rainbow isle, the Isle of Skye.

On the drive there Nicky and Les, used to rain, wind and hilly terrain averse groups, tried to talk me out of tomorrow’s scheduled visit to the Fairy Glen because the weather forecast promised a 60-90% chance of rain in the morning. I was insistent, though, so we made plans for the next day’s early morning departure to a place we’d all been looking forward to experiencing. 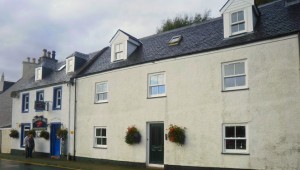 By the time we got to our hotel on Skye, the somewhat mild climate had changed and we were treated to a full scale preview of tomorrow’s promised inclement weather. As we were crowding into the hotel’s small lobby, my BFF, David Nathan greeted me! David lives in London and had always wanted to visit Skye plus we have an agreement to meet at least once a year in a place that’s foreign to one or both of us, so the Isle of Skye was a perfect place for us to continue staying true to our commitment to meet on foreign soil.

The remainder of the day was free for us to go off on our own and explore Skye’s capitol town of Portree and after we got settled in our rooms, we split up and did just that. Some of us walked down to the colorful harbor, some went shopping (of course!), some retired to the bar and sampled some of Scotland’s finest whisky and some of us just wandered around this picturesque piece of heaven on earth, thankful that we’d listened to our souls and come along on this great adventure.

David and I ate dinner in the hotel and had a wonderful meal. We passed the time telling each other what we’d been up to since our last meeting in June when we’d met in New York. 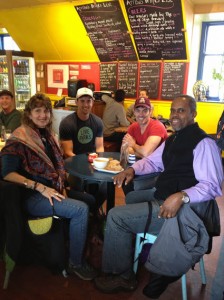 Many of my friends know of David and it was fun introducing them to each other. After dinner, we stopped by a comfy alcove on the hotel’s second floor where Jan was giving card readings to a few Odyssey-ites. We joined them and I loved being on the receiving end of a good reading! The energy in that alcove was so special-everyone there was happy and fully engaged.

After David went back to his hotel, I bid the Odyssey-ites good night and retired for what was a well-deserved good night’s sleep knowing that we’d all just experienced another day of other-worldly miracles.